You’re in a highly competitive industry. Not only does the next version of your product need to offer more value to end users than your current version, but it needs to outperform your competitors as well. User research has identified new feature concepts that your customers are responsive to. Incremental improvements in existing features are also an option. Which version of the product should you go to market with? Which version would win you market share versus your competitors? Which version would bring in the most additional revenue? If this describes your situation, then you might benefit from Choice Based Conjoint Analysis (CBC).

CBC is a survey methodology that closely resembles real-world purchase decisions. Survey respondents are shown a number of product concepts, usually three at a time, and asked to indicate which concept they prefer most. Each product concept is defined by a combination of attributes. For example, a laptop has brand, size, weight, processor speed, RAM, disk space, and price. Each of these attributes has different ways they can be built into the final product, called features. Feature levels of the brand attribute might be Dell, IBM, Lenovo, or HP laptop. Feature levels of the RAM attribute might have 4, 6, 8, or 10 GB of RAM.

Because the respondent is asked to indicate which combination of features they most prefer, this allows us to build a statistical model that predicts product preference based on what features a hypothetical laptop has. This is referred to as preference share. Some CBC versions follow up the preference survey question with a purchase intent question, such as “if the product you selected above were available in the market today, would you buy it at this time?”. This is called purchase share and is used as a proxy for market share.

I use Sawtooth Software to design and program CBC surveys. Click here for a short video that helps explain the benefits of this methodology. 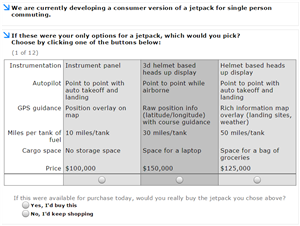 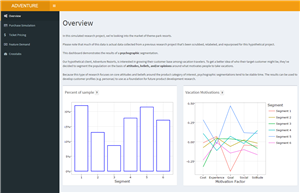