Are your preparing to launch a product or service with features that are new to the marketplace? Are there more of these features than can be developed before launch? How do you prioritize which features need to be included in the initial launch and which ones can wait for future updates? The Kano Model can be used to categorize features as ‘Must-Have’, ‘Delighters’, and more.

Much like Gap Analysis, the Kano Model theorizes that overall satisfaction is related to whether a product delivers more than expected. But when a feature doesn’t exist in the marketplace yet, it’s impossible to measure the performance of a specific product feature or attribute. Instead, the Kano Model measures expectations around the presence or absence of a feature.

Must-have features are those that are expected, but users aren’t particularly excited about. These are table-stakes, such as a car should have door locks.

One-Dimensional features are those that users expect, and like when they get more value out of it. An example of this might be a car with good gas mileage; the more the better.

Delighters or Attractive features are those that are relatively new to the market and users like, but they don’t necessarily expect yet. A Wi-Fi enabled car might be an example of this.

In order to gauge the level of expectation for a feature, the Kano Model traditionally asks respondents to imagine a product without the feature in question. If they’d be indifferent to its absence, then it’s inferred that they don’t yet expect this feature to be included in the product category.

To measure expectation, I use a modified Kano method. For each feature in question, respondents are asked to indicate how ‘surprised’ they would be if it were included, and how much they would ‘like’ the feature to be included. 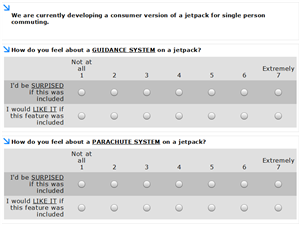